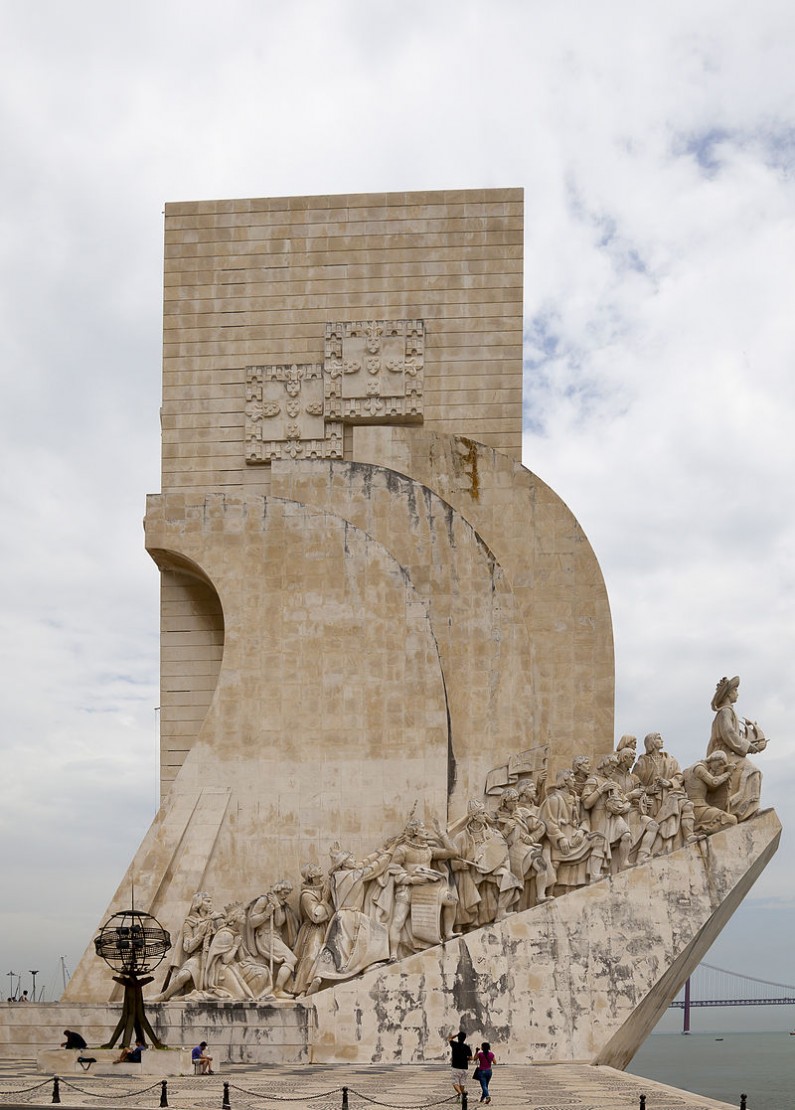 Padrão dos Descobrimentos, Monument to the Discoveries is a monument on the northern bank of the Tagus River estuary, in the civil parish of Santa Maria de Belém, Lisbon. Located along the river where ships departed to explore and trade with India and Orient, the monument celebrates the Portuguese Age of Discovery (or Age of Exploration) during the 15th and 16th centuries.

The structure is located on the northern bank of the Tagus River, limited by the Belém Marina, Algés and Dafundo Nautical Centre and the Museum of Popular Art (Portuguese: Museu de Arte Popular), and demarcated by stone pedestals with armillary spheres. Opposite the large square, and across the Avenida de Índia-Avenida de Brasília motorway, is the Praça do Império which fronts the Jerónimos Monastery, Belém Cultural Center and the green-spaces of the Jardim Vasca do Gama.

The original structure, which Telmo, Barros and Almeida created, was erected in steel and cement, while the 33 statues was produced in a composite of plaster and tow. Ostensibly a 52-metre-high (171 ft) slab standing vertically along the bank of the Tagus, the design takes the form of the prow of a caravel (ship used in the early Portuguese exploration). On either side of the slab are ramps that join at the river’s edge, with the figure of Henry the Navigator on its edge. On either side of the Infante, along the ramp, are 16 figures (33 in total) representing figures from the Portuguese Age of Discovery. These great people of the era included monarchs, explorers, cartographers, artists, scientists and missionaries. Each idealized figure is designed to show movement towards the front (the unknown sea), projecting a direct or indirect synthesis of their participation in the events after Henry.

The South African government was responsible for gifting the construction of the square in front of the monument: the 50-metre-diameter (160 ft) Rosa-dos-Ventos (compass rose) was executed using different types of limestone, including lioz, a rare type of beige limestone found only around Lisbon, more specifically in Sintra. Designed by the architect Cristino da Silva, it includes a Mappa mundi that is 14 metres wide, showing the routes of Portuguese carracks and caravels during the Age of Discovery.

On the northern façade flanking the staircase are two inscriptions in metal: on the left, “AO INFANTE D. HENRIQVE E AOS PORTVGVESES QVE DESCOBRIRAM OS CAMINHOS DO MAR” (To Prince Henry and the Portuguese that Discovered the Roads of the Sea) over a metal anchor; and, on the right, the words “NO V CENTENÁRIO DO INFANTE D. HENRIQVE 1460 – 1960″ (On the Fifth centenary of Prince Henry 1460–1960), over a crown of laurel. The double staircase ascends one level, before the entranceway to the monument, allowing a perspective on the square and the lateral figures. 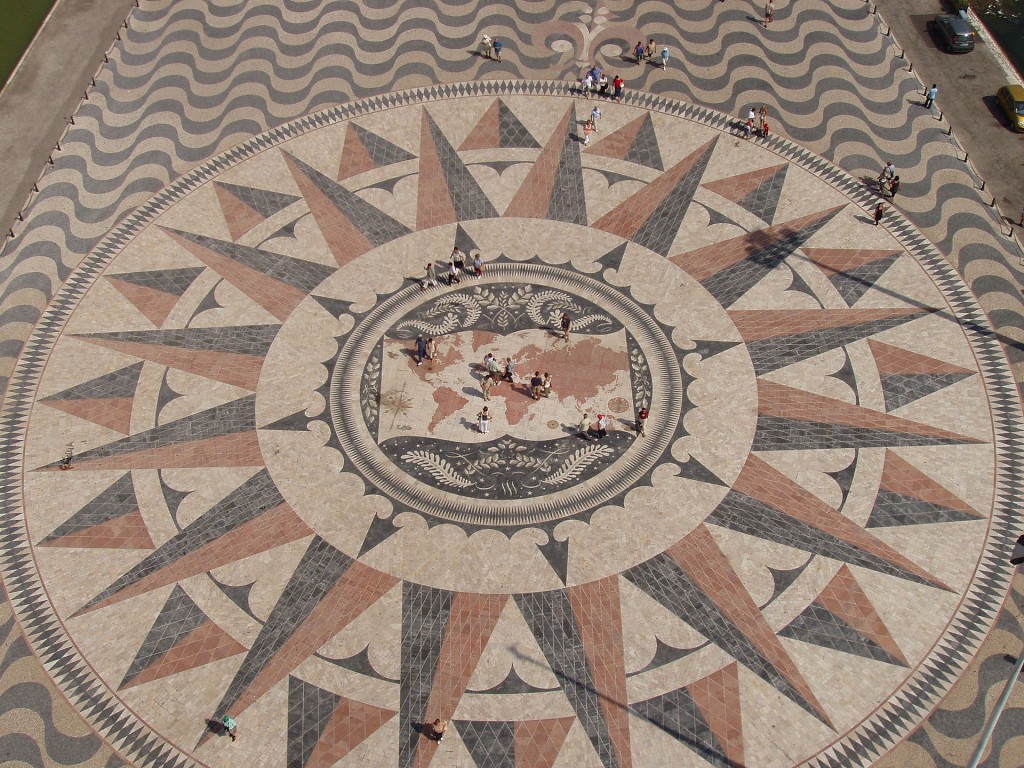 The compass rose andmappa mundi, a gift from the Republic of South Africa and created from beige, black and red limestone

The interior consists of three areas: the auditorium with space for 101 people, a stage of 18 square metres (190 sq ft), with film projection booth; a secondary level with two halls for exhibition; and the last level with four rooms. Normally, the auditorium hosts a multimedia exhibition on the history of Lisbon, while the other rooms are used for exhibitions. The top of the monument (reached via an elevator or stairs) offers views of the Tagus river, the Belém neighbourhood and its many attractions, including the Belém Tower and the Jerónimos Monastery, which date from the Age of Discovery.