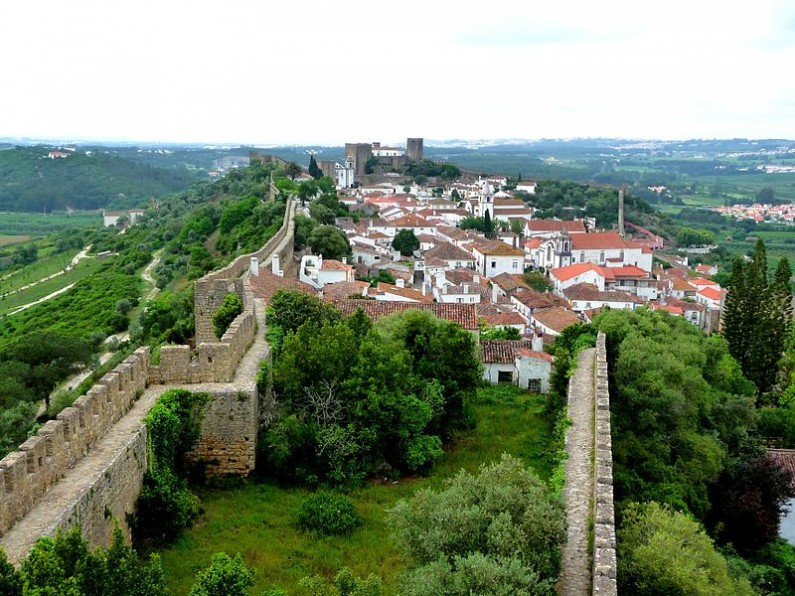 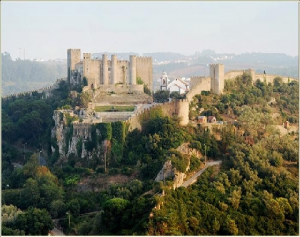 The name “Óbidos” probably derives from the Latintermoppidum, meaning “citadel”, or “fortified city”.Roman occupation of the area was confirmed by archaeological excavations, revealing the existence of a Roman city civitas near the hilltop on which the village and castle were established. This Roman settlement is most certainly the mysteriousEburobrittium, cited by Pliny the Elder as situated between Collipo (near present-day Leiria) and Olisipo (Lisbon). Archeological surveys determined the remains of aforum, baths and other Roman structures near the settlement.

After the fall of Rome, came under the influence of the Visigoths, although specific records are missing. The Roman town of Eburobrittium was abandoned in the 5th century for the more secure hilltop where today the principal settlement located. Sometime after 713 the Moors established a fortification on this mountain, while a Christian community of Mozarabs lived in the Moncharro neighbourhood.

The area was taken from the Moors by the first King of Portugal, Afonso Henriques, in 1148. Tradition states that one knight, Gonçalo Mendes da Maia, was responsible for the successful storming of the Moorish castle. The retaking of Óbidos was a final stage in the conquest of the Estremadura region, after the settlements of Santarém,Lisbon and Torres Vedras. Following the control of the region, the settlement received its first foral (English: charter) in 1195, during the reign of Sancho I. In 1210, King Afonso II gave the title of this village to Queen Urraca. Since then, Óbidos has often been patronized by the Queens of Portugal, giving rise to its informal title as Vila das Rainhas (English: town of the Queens); several royal consorts enriched the village with donations from the Middle Ages until the 16th century.[1]

The castle and walls of Óbidos were remodelled during the reign of King Dinis I. The limestone and marble structure was strengthened and elaborated, while the keep was created in the 14th century, by King Fernando. By the time of the first remodelling project, the settlement had also grown beyond the gates of the castle.

The Church of Santa Maria in Óbidos was the setting for the wedding of King Afonso Vto his cousin, Princess Isabella of Coimbra, on 15 August 1441, when they were both still children aged 9 and 10, respectively.

Each July ÓBIDOS CASTLE hosts a traditional MEDIEVAL MARKET. For two weeks the castle and the surrounding town recreate the spirit of medieval Europe.

Flowing banners and heraldic flags set the mood together with hundreds of entertainers and stall holders dressed as merchants,jugglers, jesters, wandering minstrels, soldiers and more. Visitors can shop at the traditional handcrafts fair or watch medieval shows, horse displays and a costumed parade that winds its way through the streets. There are also displays of jousting knights and armed combat.

Spit roasted hog, hearty soups, rabbit, lamb, cod, quail, sausages and other grilled meats are just some of the many medieval style meals on offer from dozens of “taverns” and stalls spread throughout the market. Drinking from pewter tankards and eating from woodentrencher all adds to the experience.