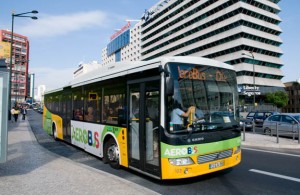 Aerobus operates three routes to main spots of the city.

Aerobus 2 connects to the Oriente bus/railway terminals with 30 min interval.

Aerobus 3 runs every 30 min to the central bus station at Sete Rios via the Entrecampos train station. Tickets cost €3.50.

Note that Aerobus tickets no longer include unlimited public transportation, they are only valid for the Aerobus.