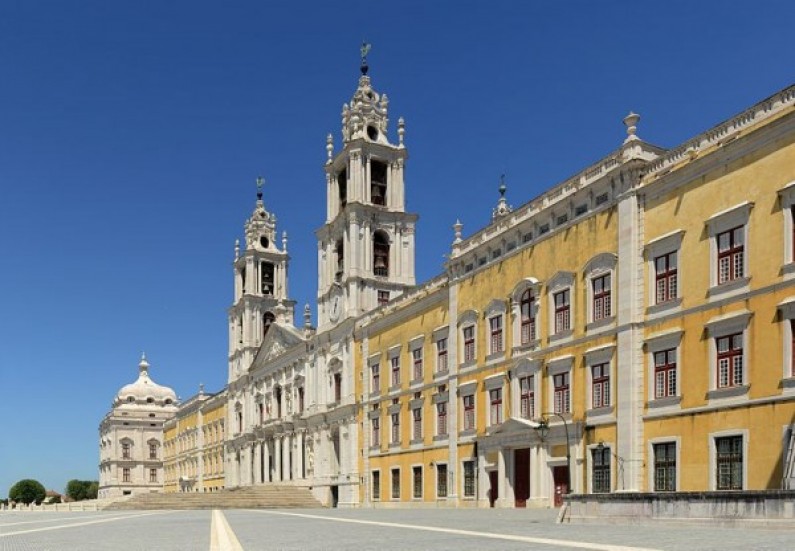 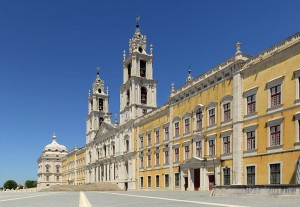 The Mafra National Palace is a monumental Baroque palace-monastery located in Mafra, Portugal, some 28 kilometres from Lisbon. The palace, which also served as a Franciscan monastery, was built during the reign of King John V (1707–1750), in consequence of a vow made by the king in 1711, who promised to build a convent if his wife, the Queen Mary Anne of Austria, gave him descendants. The birth of his first daughter, the princess Barbara of Braganza, made the king initiate the construction of the palace. It was conveniently located for hunting in the nearby forests, and was usually a secondary residence for the royal family.

This vast complex is among the most sumptuous Baroque buildings in Portugal and one of the biggest buildings constructed in Europe in the 18th century. The palace was built symmetrically from a central axis, occupied by the basilica, and continues lengthwise through the main façade until two major towers. The structures of the convent are located behind the main façade. The building also includes a major library, with about 40,000 rare books.

The basilica is decorated with several Italian statues and includes six historical pipe organs and two carillons, composed of 92 bells. With 40 000 m² it is one of the largest palaces in the Iberian Peninsula, and one of the largest in the world.

The exact site was chosen in 1713 and purchased in 1716. Construction began by the laying of the first stone on November 17, 1717 with a grand ceremony in the presence of the king, his entire court and the Cardinal Patriarch of Lisbon.

Initially it was a relatively small project for a friary of 13 Capuchin friars, who were to observe strict poverty. However, when the flow of gold from the Portuguese colony of Brazil started to arrive in Lisbon in abundance, the king changed his plans and announced the construction of a sumptuous palace[1] along with a much enlarged friary. This immense wealth allowed to king to be a generous patron of arts.

He appointed a German goldsmith Johann Friedrich Ludwig (called by the Portuguese : João Frederico Ludovice) as his architect. Ludwig had studied architecture in Rome and knew contemporary Italian art. The extent of Ludwig’s responsibility is unclear, as several other architects were involved in this project: the Milanese builder Carlos Baptista Garbo, Custódio Vieira, Manuel da Maia and even his own son António. However the application of the same architectural style over the whole building suggests the work of Ludwig as the head-architect in charge of the Royal Office of Works (Real Obra).

Construction lasted 13 years and mobilized a vast army of workers from the entire country (a daily average of 15,000 but at the end climbing to 30,000 and a maximum of 45,000), under the command of António Ludovice, the son of the architect. In addition 7,000 soldiers were assigned to preserve order at the construction site. They used 400 kg of gunpowder to blast through the bedrock for the laying of foundations. There was even a hospital for the sick or wounded workers. A total of 1,383 workers died during the construction.

When complete the building consisted of a friary capable of sheltering 330 friars, along with a royal palace and a huge library of 40,000 books, embellished with marble, exotic woods and countless artworks taken from France, Flanders and Italy, which included six monumental pipe organs and the two carillons.

The basilica and the convent were inaugurated on the day of the King’s 41st birthday on October 22, 1730. The festivities lasted for 8 days and were of a scale never seen before in Portugal. The basilica was dedicated to Our Lady and to St. Anthony.

However the building was not finished. The lantern on the cupola was completed in 1735. Work continued till 1755, when the work force was needed in Lisbon by the devastations of the Lisbon earthquake.

The palace was not occupied permanently by the royalty, who considered the rooms too gloomy. Nonetheless, it was a popular destination for the members of the royal family who enjoyed hunting in the nearby game preserve, the Tapada Nacional de Mafra. During the reign of king John VI the palace was inhabited for a whole year in 1807. The king was responsible for a partial renovation of the building by some well-known artists. However, with the French invasionof Portugal, in 1807, the royal family fled to Brazil, taking with them some of the best pieces of art and furniture in the building. Marshall Junot took up residence in the palace, to be driven out in turn by Wellington.

In 1834, after the Liberal Wars, Queen Maria II ordered the dissolution of the religious orders and the convent was abandoned by the Franciscans. During the last reigns of the House of Braganza, the palace was mainly used as a base for hunting. In 1849 the monastery part of the building was assigned to the military, a situation still in use today.

The last king of Portugal, Manuel II, following the proclamation of the republic, left on 5 October 1910 from the palace to the nearby coastal village of Ericeira on his way to exile. The palace was declared a national monument in 1907. At present, the building isconserved by the Portuguese Institute of the Architectonic Patrimony, which carried out several recovery programs, including the conservation of the main façade. A major restoration of the historical pipe organs began in the 1990s with the collaboration of foreign experts. 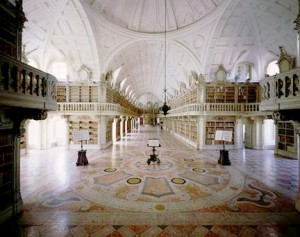 The Rococo library, situated at the back of the second floor, is truly the highlight of this palace, rivalling the grandeur of the library of the Melk Abbey in Austria. Built by Manuel Caetano de Sousa, this library is 88 m long, 9.5 m wide and 13 m high. The magnificent floor is covered with tiles of rose, grey and white marble. The wooden bookshelves in Rococo style are situated on the sidewalls in two rows, separated by a balcony with a wooden railing. They contain over 35,000 leather-bound volumes, attesting of the extent of western knowledge from the 14th to the 19th century. Among them, are many valuable bibliographical jewels, such as incunabula. These beautiful finished volumes were bound in the local workshop (Livraria) in the rocaille style (also by Manuel Caetano de Sousa).

Besides natural techniques of conservation for the books, such as the lack of space between the wall and the book (so it doesn’t create humidity), there are also a few bats that inhabit this library eating any insect that could destroy this invaluable treasure.

The Library was used in Gulliver’s Travels (1996) as the Great Chamber of War for the Emperor of Lilliput.