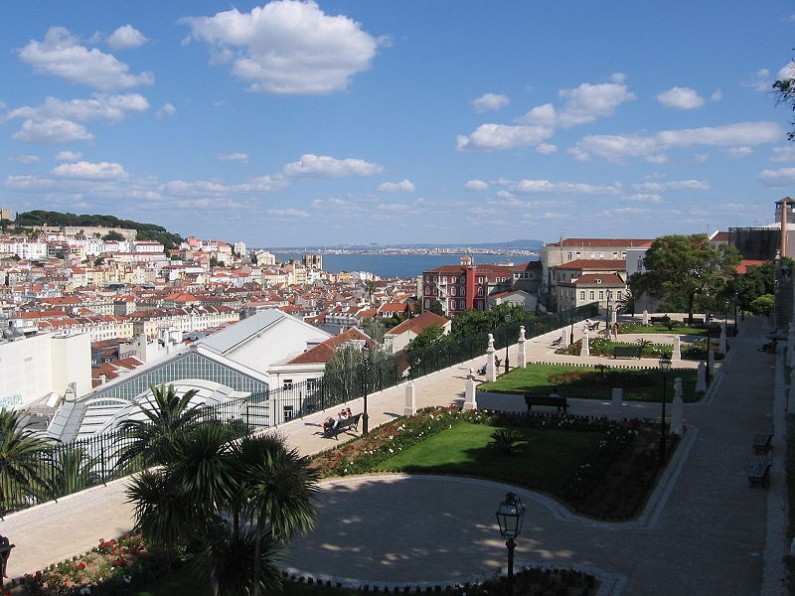 The Garden of São Pedro de Alcântara is a garden located in Lisbon, in the parish of Incarnation.
Is located at Rua de São Pedro de Alcântara, near Bairro Alto. The garden has a small pond and a gazebo, which offers a magnificent view over the east of Lisbon sighting is part of the Baixa district and the south bank of the Tagus river.
There is a map in tiles along the balustrade, which helps to identify some sites of Lisbon. The panorama extends from the walls of Castelo São Jorge surrounded by trees and Lisbon Cathedral (XII century), in the hills to the southwest, to the Penha Church of eighteenth-century France, northwest. Also visible is the large complex of Grace Church, while São Vicente de Fora is recognizable by symmetrical towers around the white facade.
Banks and the shadows of the trees make a very nice viewpoint. To get to the viewpoint can choose to climb the Walk of Glory and then climb the Glória funicular that leaves right near the gazebo.
In the garden, the monument authored by Costa Motta (uncle), erected in 1904, Eduardo Coelho is the founder of the newspaper Diário de Notícias, beneath it a ardina touts the famous newspaper.
The view is more impressive at sunset and at night, when the Castle and Cathedral are illuminated, and the gazebo is a popular meeting point for young weekenders.