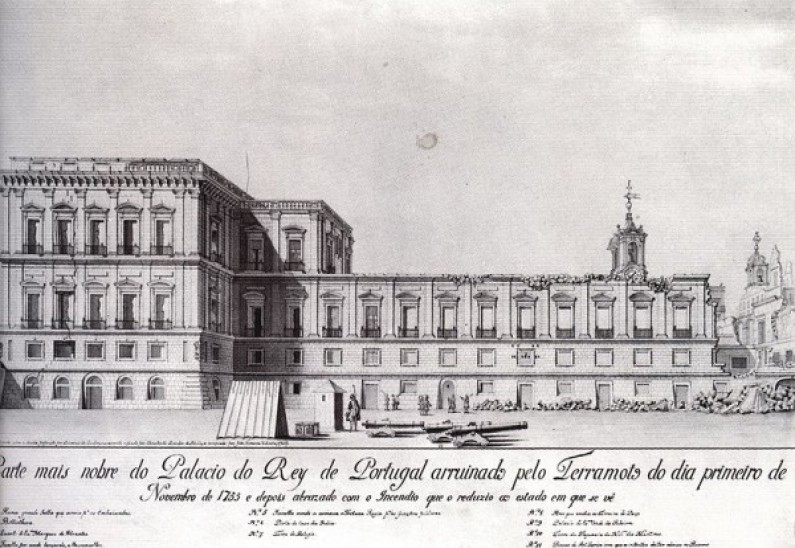 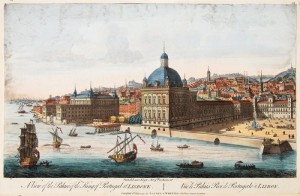 Ribeira Palace was the main residence of the Kings of Portugal, inLisbon, for around 250 years. Construction of the palace was ordered under King Manuel I of Portugal, when he found the Royal Palace of Alcáçova unsuitable. The palace suffered innumerous remodels and reconfigurations from its original Manueline complex, ending with its final Mannerist and Barroque form.

The palace, along with most of the city of Lisbon, was destroyed in the 1755 Lisbon earthquake. After the earthquake, the reigning monarch, King José I, suffered from claustrophobia and chose to live the rest of his life in a complex of pavilions in the hills of Ajuda, and thus the palace was never rebuilt.

Today, Lisbon’s primary square, the Praça do Comércio, is situated on the site of the former palace. The square is still popularly referred to as the Terreiro do Paço, reminiscent of the now destroyed royal residence.

The groundbreaking lof the palace was in 1498. The new palace was not to be located on a high and easily protected fortress hill, like the Palace of Alcáçova was, but instead it was built on the river shore of the Tagus river, giving it the name of Ribeira Palace, or Palace of the Riverside. The new royal palace was located in the heart of renaissance Lisbon, which had become one of the most important cities and ports in all Europe, on account of its importance in the spice trade and Age of Discoveries. Ribeira palace was situated next to theRibeira das Naus shipyard and near all the major Lisbon trading houses.

In 1502, the palace had been built large enough so that the Portuguese Royal Court could begin moving into the palace. In 1508, King Manuel I started expansion works on the palace, which ended in 1510, and appointed Diogo de Arruda as head architect of the project. The King was an absolutist in all manners, and sought to concentrate all his powers in Ribeira Palace, by holding the Portuguese Cortes and installing the Casa da Índia, the imperial administration, in the palace’s walls.

The palace of King Manuel I, and his successors until King Henry I of Portugal, was a true palace of the Portuguese Renaissance. Done in the Manuelinestyle, among others, the palace included various wings, loggia, balconies, gardens, and courtyards. The main loggia of the palace, facing the Terreiro do Paço, followed the style employed by King Manuel I at many of his palaces, most notably at the Royal Palace of Évora.

The hallmark of the palace, not just in the Manueline era but in all it’s history, was its Tower of the King, in the southern wing. During the Manueline era, the Casa da Índia was installed in the tower, which hoisted a large sculpture of the Royal Coat of Arms of Portugal on the exterior of the tower, facing the river. Starting in 1525, King John III sponsored a set of enlargements and renovations to the palace, which, most notably, altered the Tower of the King, expanding it and opening a large balcony, faced towards the Tagus.

When the Portuguese House of Habsburg seized the throne, in 1580, the newly acclaimed King Philip I of Portugal started a large series of constructions and renovations throughout Portugal, seeking to rehabilitate the kingdom after the War of the Portuguese Succession. During his three year stay in Lisbon, from 1580 to 1583, King Philip I, who also ruled as King of Castile, Aragon, and Naples, considered turning Lisbon into the imperial capital of his trans-European monarchy and empire.

To better suit Lisbon for King Philip I’s extravagant court, the King ordered the remodeling and expansion of Ribeira Palace, under the authority of Filipe Terço, the Master of the Royal Works. King Philip I decided to modernize the palace, stripping it of its early renaissance, Manueline style and planning and converting Ribeira Palace into a monumental, organized Mannerist complex. The highlight of the Philipine renovations was the reconstruction and enlargement of the Tower of the King, which transformed a three-story Manueline tower, which housed the Casa da Índia, into a five-story Mannerist tower, complete with an observatory and one of the largest royal libraries in all of Europe.

Ribeira Palace of the Brigantine era was a vast and modern palatial complex, including an opera and cathedral.

Another King to improve the Palace was John V, who invested great sums – derived from the gold mines in colonial Brazil – to enlarge and embellish the Ribeira Palace. The original manueline chapel was turned into a magnificentbaroque church, and the Palace gained another wing, parallel to the previous one. Later in the century, King Joseph I built a Royal Opera House by the Palace, designed by the Italian Giuseppe Bibiena.

The Opera House, inaugurated in 1755, lasted only a few months. On 1 November of 1755, a huge earthquake, and resulting tsunami and fire destroyed the palace and most of Lisbon. King Joseph I was not at the palace and survived. His Prime Minister, the 1st Marquess of Pombal, coordinated a massive reconstruction effort that would give rise to the Pombaline Downtownof Lisbon. The royal family abandoned the Ribeira area and moved to palaces in the areas of Ajuda and Belém. 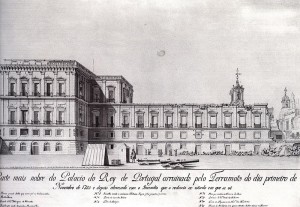 The old Palace Square (Terreiro do Paço) gave rise to a new square, the Pombaline Commerce Square (Praça do Comércio). The two towers at the corners of the square are still reminiscent of the old tower of the Ribeira Palace.