The monastery is one of the most prominent examples of the Portuguese Late Gothic Manueline style. 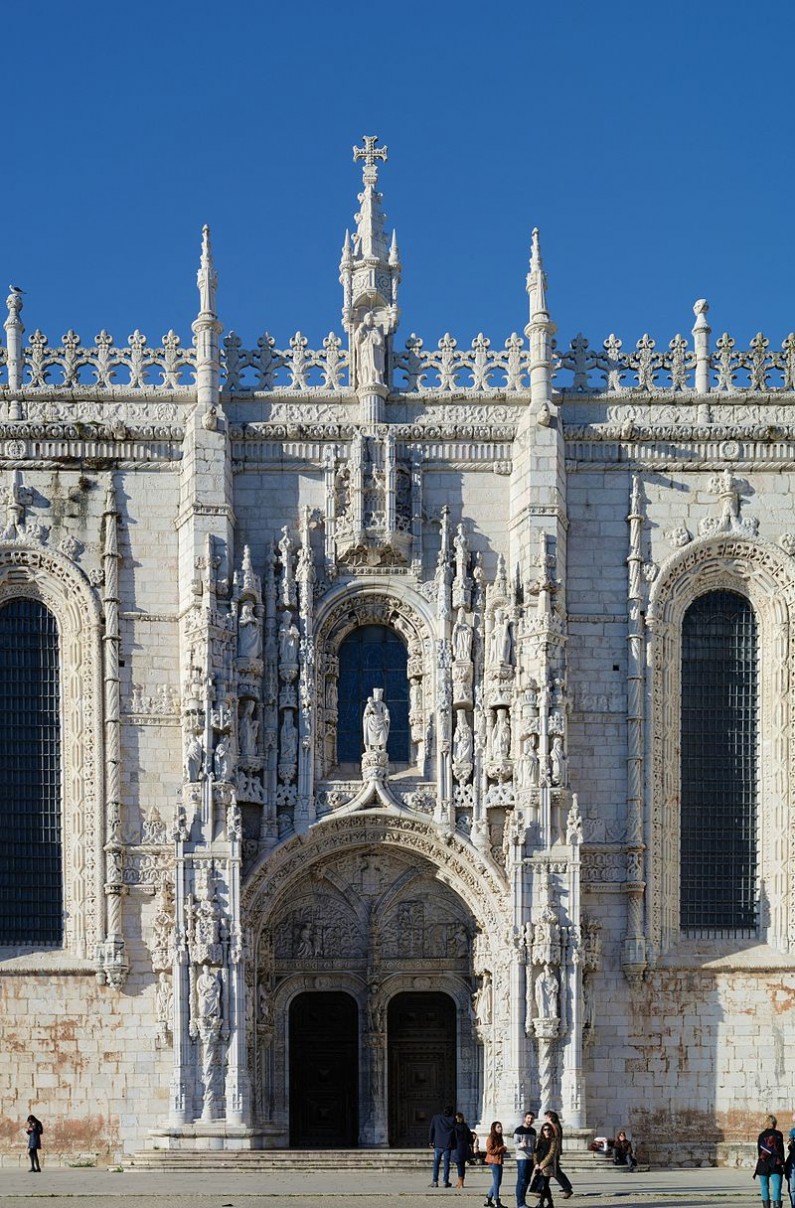 The Jerónimos Monastery or Hieronymites Monastery, is a monastery of the Order of Saint Jerome located near the shore of the parish of Belém, in the Lisbon.

The monastery is one of the most prominent examples of the Portuguese Late Gothic Manueline style of architecture in Lisbon. It was classified a UNESCO World Heritage Site, along with the nearby Tower of Belém, in 1983.

The Jerónimos Monastery replaced the church formerly existing in the same place, which was dedicated to Santa Maria de Belém and where the monks of the military-religious Order of Christ provided assistance to seafarers in transit. The harbour of Praia do Restelo was an advantageous spot for mariners, with a safe anchorage and protection from the winds, sought after by ships entering the mouth of the Tagus. The existing structure was inaugurated on the orders of Manuel I (1469–1521) at the courts of Montemor o Velho in 1495, as a final resting-place for members of the House of Aviz, in his belief that an Iberian dynastic kingdom would rule after his death. In 1496, King Manuel petitioned the Holy See for permission to construct a monastery at the site. The Hermitage of Restelo (Ermida do Restelo), as the church was known, was already in disrepair when Vasco da Gama and his men spent the night in prayer there before departing on their expedition to the Orient in 1497.

The construction of the monastery and church began on 6 January 1501, and was completed 100 years later. King Manuel originally funded the project with moneys obtained from the Vintena da Pimenta, a 5 percent tax on commerce from Africa and the Orient, equivalent to 70 kilograms (150 lb) of gold per year, with the exception of those taxes collected on the importation of pepper, cinnamon and cloves, which went directly to the Crown. With the influx of such riches, the architects were not limited to small-scale plans, and resources already prescribed for the Monastery of Batalha, including the Aviz pantheon, were redirected to the project in Belém.

Manuel I selected the religious order of Hieronymite monks to occupy the monastery, whose role it was to pray for the King’s eternal soul and to provide spiritual assistance to navigators and sailors who departed from the port of Restelo to discover lands around the world. This the monks did for over four centuries until 1833, when the religious orders were dissolved and the monastery was abandoned.
Manueline ornamentation in the cloisters of Jerónimos Monastery
The monastery was designed in a manner that later became known as Manueline: a richly ornate architectural style with complex sculptural themes incorporating maritime elements and objects discovered during naval expeditions, carved in limestone. Diogo de Boitaca, the architect, pioneered this style in the Monastery of Jesus in Setúbal. Boitaca was responsible for drawing the plans and contracting work on the monastery, the sacristy, and the refectory. For its construction he used calcário de lioz, a gold-coloured limestone quarried from Ajuda, the valley of Alcántara, Laveiras, Rio Seco and Tercena. Boitaca was succeeded by the Spaniard Juan de Castilho, who took charge of construction around 1517. Castilho gradually moved from the Manueline to the Spanish Plateresque style, an ornamentation that included lavish decorations suggesting the decorative features of silverware ({plata). The construction came to a halt when King Manuel I died in 1521.

Several sculptors left their mark on this building: Nicolau Chanterene added depth with his Renaissance themes, while the architect Diogo de Torralva resumed construction of the monastery in 1550, adding the main chapel, the choir, and completing the two stories of the monastery, using only Renaissance motifs. Diogo de Torralva’s work was continued in 1571 by Jérôme de Rouen (also called Jerónimo de Ruão) who added some classical elements. The construction stopped in 1580 with the union of Spain and Portugal, as the building of the Escorial in Spain was now draining away all the allocated funds.

On 16 July 1604, Philip of Spain (who ruled after the Iberian Union) made the monastery a royal funerary monument, prohibiting anyone but the royal family and the Hieronymite monks from entering the building. A new portal was constructed in 1625, as well as the cloister door, the house of the doorkeepers, a staircase and a hall that was the entrance to the upper choir designed by the royal architect Teodósio Frias and executed by the mason Diogo Vaz. In 1640, the prior Bento de Siqueira ordered construction of the monastery’s library, where books owned by the Infante Luís (son of King Manuel I) and others linked to the religious order were deposited.

With the restoration of Portuguese Independence in 1640, the monastery regained much of its former importance, becoming the burial place for the royal pantheon; within its walls four of the eight children of John IV of Portugal were entombed: the Infante Teodósio (1634–1653), the Infanta Joana (1636–1653), King Afonso VI (1643–1683) and Catarina de Bragança (1638–1705). In 1682 the bodiy of Cardinal Henrique in the transept chapels was buried. On 29 September 1855, the body of King Afonso VI was transported to the royal pantheon of the House of Braganza in the Monastery of São Vicente de Fora, along with his three brothers and sister.

The Monastery in the mid-18th century.
In 1663, the Brotherhood of the Senhor dos Passos occupied the old Chapel of Santo António, which was redecorated with a gold tiled ceiling in 1669, while the staircase frescos with the heraldry of Saint Jerome were completed in 1770. The retables were completed in 1709 and 1711, valuable alfaias were presented to the religious order, and the sacristy was redecorated in 1713. The painter Henrique Ferreira was commissioned in 1720 to paint the Kings of Portugal: the regal series was placed in the Sala dos Reis (Hall of the Kings). Henrique Ferreira was also commissioned to complete a series of nativity paintings

The monastery withstood the 1755 Lisbon earthquake without much damage, only the balustrade and part of the high choir were ruined, but they were quickly repaired. On 28 December 1833, by state decree the Jerónimos Monastery was secularised and its title transferred to the Real Casa Pia de Lisboa (Pious Royal House of Lisbon) to serve as a parochial church for the new civil parish of Santa Maria de Belém. Many of the artworks and treasures were either transferred to the crown or lost during this period. It was vacant most of the time and its condition began to deteriorate.

Restoration work began on the monastery after 1860, starting with the southern façade under supervision of the architect Rafael Silva e Castro, and in 1898 under Domingos Parente da Silva. Although the cloister cistern, internal clerical cells and the kitchen were demolished at this time, three reconstruction projects proposed by architect J. Colson, including the introduction of revivalist neo-Manueline elements, failed to gain the required approval. In 1863, architect Valentim José Correia was hired by the ombudsman of the Casa Pia, Eugénio de Almeida, to reorganise the second storey of the old dormitory and design the windows (1863–1865). He was subsequently replaced by Samuel Barret, who constructed the towers in the extreme western end of the dormitories. Similarly and inexplicably, Barret was replaced by the Italian scenery designers Rambois and Cinatti, who had worked on the design of the São Carlos Theatre, to continue the remodelling within the monastery in 1867. Between 1867 and 1868, they profoundly altered the annex and façade of the Church, which then appeared as it does today. They demolished the gallery and Hall of the Kings, constructed the towers of the eastern dormitory, the rose window of the upper choir and substituted the pyramid-shaped roof of the bell tower with the mitre-shaped design. The remodelling was delayed by the 1878 collapse of the central dormitory. After 1884, Raymundo Valladas began to contribute, initiating in 1886 the restoration of the cloister and the Sala da Capítulo, including construction of the vaulted ceiling. The tomb of Alexandre Herculano, designed by Eduardo Augusto da Silva, was placed in the Sala da Capítulo in 1888.

To celebrate the 1898 fourth centenary of the arrival of Vasco da Gama in India, it was decided to restore the tomb of the explorer in 1894. The tombs of Vasco da Gama and Luís de Camões, carved by the sculptor Costa Mota, were placed in the southern lateral chapel. A year later the monastery received the remains of the poet João de Deus, later joined by the tombs of Almeida Garret (1902), Sidónio Pais (1918), Guerra Junqueiro (1923) and Teófilo Braga (1924).