The National Azulejo Museum (Portuguese: Museu Nacional do Azulejo) is a national museum in Lisbon, Portugal, dedicated to the azulejo. The museum is also referred to as The National Tile Museum.

The National Tile Museum was established in 1965 and became a National Museum in 1980. It is located in the former Convent of Madre Deus, founded by Queen D. Leonor in 1509. The Museum went through different building campaigns that involved transformations such as in its 16th-century mannerist cloister; the church which is decorated with remarkable sets of paintings and tiles; the sacristy featuring a Brazilian wood display cabinet and carved wood frames with paintings; the high choir with rich carved gilt wood embellishments; the Chapel of Saint Anthony with an 18th century Baroque decoration and a significant number of canvases by the painter André Gonçalves.

The museum collection features decorative ceramic tiles or azulejos from the second half of the 15th century to the present-day. Besides tiles, it includes ceramics, porcelain and faience from the 19th to the 20th century. Its permanent exhibition starts with a display of the materials and techniques used for manufacturing tiles. After this the exhibition route follows a chronological order. 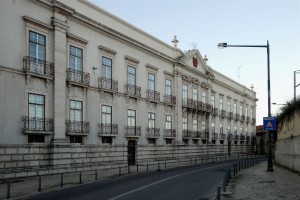 The former Convent of Madre de Deus, where the museum is housed